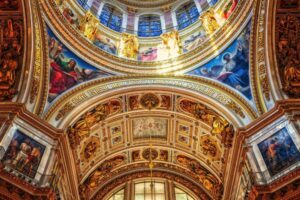 The St Albans Symphony Orchestra (SASO) 2021-22 season will commence at their primary concert venue, St Saviour’s Church on Saturday 16th October 2021. We are delighted to retain Tom Hammond as our principal conductor for a sixth season, and to have Charlotte Fairbairn succeeding Jenny Wigram as leader, after Jenny’s astonishing 28 years in the role.

The concert will feature some of the best Russian classical music, opening with Sergei Rachmaninoff’s hauntingly beautiful ‘Vocalise’, his orchestral arrangement of the wordless song that completed his Op.34 ‘14 Songs’.

After the interval, Pyotr Ilyich Tchaikovsky’s dramatic and large-scale 4th Symphony will complete the evening. This four-movement work was completed in 1879, following the failure of Tchaikovsky’s brief marriage. He described the symphony’s opening fanfare as a metaphor for “Fate”. Despite initially critical reviews, the symphony has become one of the most popular of the late 19th century.

The annual Concerts for Children will be at St Saviour’s, in the afternoon of Sunday 21st November. We welcome Matthew Andrews as guest conductor, and Bernard Hughes, who wrote the music for ‘Isabel’s Noisy Tummy’ will narrate the story by David McKee.

SASO will be joined by womens’ choir Gloriana for the traditional New Year’s Day concert in St Albans Cathedral, which will feature Gustav Holst’s popular ‘The Planets’ suite.

On Saturday 12th March SASO will belatedly (due to the pandemic) celebrate Malcolm Arnold’s centenary at St Saviour’s.

Saturday 14th May will see SASO return to the St Albans Cathedral, joined by the Gloriana choir again, plus soprano Jessica Cale, for a programme of French music.

The season will finish with an American-flavoured programme at St Saviour’s on Saturday 2nd July, when SASO will welcome back violinist David Le Page to perform Samuel Barber’s violin concerto.