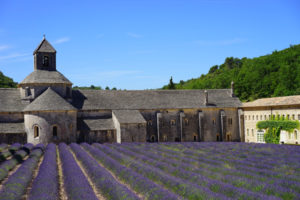 Postponed from Spring 2020 owing to the pandemic, Saint Albans Symphony Orchestra’s “Colours of France” concert of French music was at last rescheduled to take place on Saturday 14th May. A programme of works arguably more familiar in the recording studio than the concert hall these days, this was certainly great value for money – five pieces, from a short motet for women’s voices to a towering symphony for orchestra, piano duet and organ, all performed in the city’s cavernous cathedral.
The Gloriana women’s chorus opened the evening with Poulenc’s moving Ave Verum Corpus, written in 1952 but reminiscent of medieval church music.
Debussy’s three orchestral Nocturnes followed: Nuages, depicting the movement of clouds, then Fêtes, a string of frantic dances. Finally, Sirènes saw Gloriana join the orchestra to represent the titular daemonic spirits that seduced sailors to their deaths on the rocks, the ladies of the choir excelling in portraying those brazen voluptuaries.
Of Joseph Canteloube’s huge collection of Songs of the Auvergne, only Baïlèro achieved fame (or perhaps notoriety) through an advertisement; soprano Jessica Cale captured to perfection this plaintive call of a shepherdess to her lover and revelled in the skittish humour of five of the other songs. Her inspired performance won tumultuous applause.
After the interval, Gloriana sang the Cantique de Jean Racine, an early masterpiece of Fauré’s, setting Racine’s paraphrase of a hymn to a heart-warming melody.
The concert’s most substantial work was saved for last: Saint-Saëns’ glittering Third Symphony, whose exultant finale begins with a massive C major organ chord, unleashing the full force of the orchestra in an exuberant scramble to the jubilant final chord. Its echo merged with the audience’s rapturous applause for organist Andrew Parnell, Saint Albans Symphony Orchestra and conductor William Carslake, whose direction ensured the Colours of France were vibrant and pure from beginning to end.
The concert was an unqualified triumph for all involved particularly for St Albans Symphony Orchestra, whose musicians are still coming to terms with the sudden, tragic death in December of their conductor, Tom Hammond. To avoid disappointment, book early for their next concert in St Saviour’s Church on Saturday 2nd of July, dedicated to Tom’s memory.
Herbie Goldberg