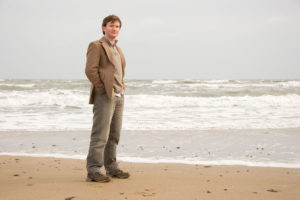 The sea in all its moods – from breezy beach holidays to storm-tossed ships on mighty oceans – provides the salt-sprayed theme for the St Albans St Cecilia Festival Concert taking place in the Cathedral on Saturday 12 October (7.30pm).

Photo: Conductor Rufus Frowde (© Glyn Davies)
By tradition, the biennial festival concert brings together Harpenden’s Hardynge Choir, St Albans Chamber Choir and Radlett Choral Society with St Albans Symphony Orchestra (SASO). However, this year the forces will be bigger than ever with the addition of London-based chamber choir Vivamus and a massed choir of children from seven Hertfordshire junior schools.
The children, from The Abbey School (St Albans), Heath Mount School (Watton-at-Stone), Princess Helena College, Hitchin, Roundwood Primary School (Harpenden) Samuel Lucas School (Hitchin) St Anthony’s School (Watford) and Wheatfields School (St Albans), will perform Seaside Postcards by the contemporary English composer Jonathan Dove. With cheery titles like ‘Wish You Were Here’ and ‘Having a Lovely Time’, the musical postcards are performed with full orchestra and make clever use of popular sea shanties.
In the main featured work, the adult choirs will set sail with A Sea Symphony by Ralph Vaughan Williams. Premiered in 1910, it was the composer’s first symphony and has remained an enduring favourite with choirs and audiences. Setting words by the American poet Walt Whitman, it pays tribute to brave seafarers in music that brilliantly captures the ocean’s grandeur as well as the swell and thrill of pitching waves.
Forty years later, another English composer, Benjamin Britten, used orchestral colours to portray a more menacing relationship between humans and the sea. Dawn calm and a sparkling sunlit morning are both marked by unease in two Sea Interludes from his opera Peter Grimes, to be performed by SASO. The orchestra’s trumpeters will start the concert with Britten’s Fanfare for St Edmundsbury.
Holding the proceedings together will be Rufus Frowde, regular conductor of the Hardynge Choir and Vivamus. In addition to being organist and assistant music director at the Chapel Royal, Hampton Court, Rufus is also an enthusiastic contributor to music education, conducting the North Herts Youth Orchestra and working closely with Hertfordshire Music Service as a conductor, including a series of school choir galas in the Royal Albert Hall.
Charlotte-Anne Shipley (soprano) and Morgan Pearse (baritone) join the choirs as soloists in A Sea Symphony. Charlotte studied at Oxford University and the Santa Cecilia Academy in Rome, winning numerous international prizes as she launched her successful career in opera, oratorio and concerts. Morgan made his debut with English National Opera in 2015 after graduating from the Royal College of Music International’s Opera School. His career highlights have included a solo recital at London’s Wigmore Hall and performances with leading orchestras in Britain and overseas.
Tickets: £28, £22, £16 and £10 (accompanied children £1) from St Albans Cathedral box office (01727 890290) or online from www,stalbanscathedral.org/event.
* A charity collection after the concert will raise money for Keech Hospice Care, caring for children with life-limiting and terminal illnesses and supporting their family and friends