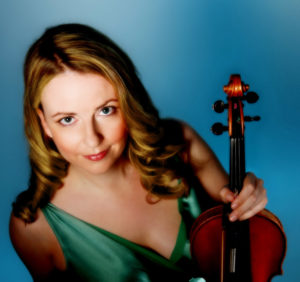 A leading British violinist will appear with SASO on Saturday 9 March playing one of the greatest of all concertos written for her instrument (7.30pm St Saviour’s, Sandpit Lane, AL1 4DF)

Clare Howick, whose reputation has soared following a series of internationally-praised recordings, will join St Albans Symphony Orchestra (SASO) to perform the turbulent and technically demanding D-major concerto by Brahms.
Her debut album of music by the English composer Cyril Scott was an immediate ‘editors choice’ on Gramophone magazine in 2007 and has been followed by a series of award-winning discs including one featuring British women composers. A recording of Elgar’s Violin Sonata was featured on BBC Radio 3 and described by one magazine critic as “ravishing” and “utterly captivating”. Her most recent world-premiere recordings of concertos by Gordon Jacob, Kenneth Leighton and Paul Leighton, reached the top 15 in the UK’s specialist classical music chart, while the American Record Guide classed her playing as ’simply spectacular’.
In addition to many solo performances at music festivals and prestigious venues such as London’s Royal Festival Hall and Wigmore Hall, Clare has appeared as guest leader with orchestras that include the Philharmonia, City of Birmingham Symphony, English National Opera and BBC Concert Orchestra. She trained at the Royal Academy of Music and has studied with some of the foremost violinists of earlier generations, including Anne-Sophie Mutter and Ida Haendel.
When first heard in 1879 the Brahms Violin Concerto was not altogether popular with critics or violin virtuosi who complained that it was formidably hard to play without giving them expected opportunities to show off. Audiences, however, knew better and the work’s combination of drama, lyrical beauty and eventual high spirits made it a firm favourite from the start.
Schubert’s ‘Great’ C-major Symphony (No 9), which also features in SASO’s concert, achieved the similar distinction of being considered too difficult by some players when first performed.  The score was only discovered ten years after Schubert died by fellow composer, Schumann, who famously fell in love with its ‘heavenly length’. Full of melodic invention and innovative orchestration, the work has long been acknowledged as a milestone in musical history.
SASO’s principal conductor, Tom Hammond, will complete his programme with the orchestra with a performance of Storr by contemporary British composer Matthew Taylor. It evokes an arduous hill walk on the Isle of Skye towards the craggy outcrop known as the Old Man of Storr. Tom has championed the work, since conducting its successful premiere with Essex Symphony Orchestra in 2012.
Click here for information about tickets