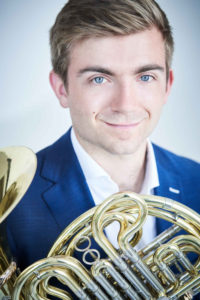 Concert-goers around the world agree that New Year and Viennese music make an unbeatable combination  – and St Albans Symphony Orchestra’s concert in the Cathedral on Wednesday 1st January 2020 (7pm) showcases works that happily fall within that tradition.
Star billing goes to Mozart’s celebrated Horn Concerto No 4 to be played by Ben Goldscheider, a 22-year old whose international career has soared since he was the brass finalist in the 2016 BBC Young Musician competition.
The concerto was written in Vienna in 1786 to show off the virtuosity of Austria’s leading horn player and has been a favourite with audiences ever since. Its catchy ‘hunting’ finale became even more familiar in the1960s when Michael Flanders and Donald Swann borrowed it for their comic song Ill Wind.
Ben Goldscheider, although still studying at the Barenboim-Said Academy in Berlin, is already acknowledged as one of Britain’s most exciting young players. He made his BBC Proms debut in 2018 and released his first album the same year, prompting BBC Music Magazine to feature him as a ‘Rising Star’ and Gramophone magazine as ‘One to Watch’.
The orchestra under their principal conductor, Tom Hammond, will also perform music by the Strauss family, including Johan the Elder’s evergreen Radetzky March and his son’s Egyptian March. In more sophisticated style, Johan the Younger’s Roses from the South is numbered among his more symphonic as well as frequently-performed concert waltzes.
Vienna in an earlier era hosted the first performances of Beethoven’s only opera Leonora, which he re-titled Fidelio in its final version. The composer wrote no less than four versions of the overture, from which SASO has selected Leonora No 3.  Drawing on dramatic incidents from the opera, it is the acknowledged masterpiece among them
The Bavarian composer Richard Strauss was no relation of the Viennese ‘Waltz King’. His stirring tone poem Don Juan, nevertheless, features prominently in the New Year programme. Promiscuous on a legendary scale, the central figure of Strauss’s music is a man on a mission to find the ideal woman. Swaggering at the start, he dies a despairing, wistful death at the end.
History, meanwhile, records that when Hector Berlioz visited Vienna in 1845 the works he conducted included his popular Roman Carnival Overture. Blessed with dancing life and two of the French composer’s most memorable tunes, it has no other Viennese connections. It is, however, the lively work that Tom Hammond has chosen to open SASO’s concert.
Photo of Ben Goldscheider (© Kaupo Kikkas)