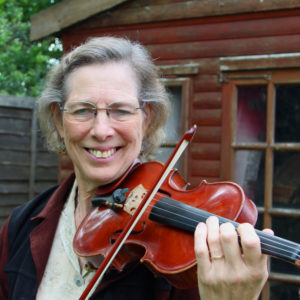 SASO’s much-loved Leader, Jenny Wigram, is leaving SASO at the end of the current 2018-19 season. Here, she looks back on a remarkable 40 years with the orchestra, all but two of them in the Leader’s chair.

Anyone who has ever attended a St Albans Symphony Orchestra New Year Concert in the Cathedral knows Jenny Wigram. She is SASO’s smiling Leader, hair usually enhanced with festive tinsel, who arrives on stage to welcoming applause and invariably departs to loud cheers.

After a remarkable 40 years with the orchestra – 38 of them as its professional Leader – Jenny has decided that 2018-19 will be her last season. SASO’s summer concert on July 6 will, therefore, be her final one.

Audiences, seeing and hearing Jenny in performance, may only be aware of her public role – in obvious charge of the violins and skilfully performing any of the ‘concertante’ solos that composers choose to include in their works.

As she points out, however, there is far more to the job than meets the eye: “As Leader you are helping to determine, through your actions in rehearsal and performances and through the preparation you do beforehand, what style the music should be played in, while getting the orchestra to play together and get the best result.

“You have to have patience and you have to prepare the music carefully, including when you pencil-in the bowing instructions for string players. If you do that, they will be able to play better from the start and the conductor will be able to concentrate more on the musical interpretation.”

She readily admits that after so many years she will not particularly miss the “bowings” mark-up and other administration for SASO’s six annual concerts. But she takes justifiable pride in the orchestra’s progress and looks back with pleasure at many musical highlights from the past four decades.

Since she and her late husband Tony, a viola player and eminent music therapist, joined the orchestra in 1977 she has worked with six different principal conductors: “Each of them has had their own, particular gifts that have helped the orchestra to develop. Over time we have been able to tackle increasingly difficult and challenging works. There are things we have played more recently, that they would not have dreamed of tackling when I first joined.”

Among the landmarks from the 1980s and 1990s were performances of Beethoven, including the titanic ‘Choral’ Symphony, and of Britten’s War Requiem. This was also the period when SASO established its now traditional New Year Concert in St Albans Abbey.

In the past 20 years, the repertoire has expanded to include epic music from the romantic period, such as Mahler’s ‘Resurrection’ Symphony, Richard Strauss’s Alpine Symphony and Stravinsky’s Rite of Spring, as well as modern, ‘minimalist’ scores like The Chairman Dances by John Adams.

“I am so pleased that we have been able to perform some of these more demanding works and introduce some of them at the New Year Concert when we have a very large audience who are looking to enjoy an entertaining evening of music.”

Jenny has also enjoyed working with many distinguished guest soloists over the years, who have included the pianists John Lill and Peter Katin, clarinettist Emma Johnson and the local celebrities, cellist Guy Johnston and pianist Alissa Firsova.

Still more memorable have been occasions when she, herself, has appeared as soloist, including her critically-acclaimed performance of Bruch’s Violin Concerto on New Year’s Day 2002. All three of her musically talented sons, Robert (violin), Michael (cello) and David (viola and saxophone) also played with SASO from a young age, with the latter two later performing as soloists.

As a popular teacher who has nurtured the violin-playing of literally thousands of St Albans children and young people, Jenny was well-placed to recruit baby-sitters for rehearsal nights when her children were little. “But it was still nice when the boys were old enough to play in the orchestra themselves and the baby-sitters were off the hook.”

Jenny remembers dressing up her small sons in Roman togas to appear on one of the floats that SASO formerly contributed to the, now defunct, St Albans Carnival. However, her family’s involvement in SASO concerts was not invariably successful: “Just before I became Leader, my mother, Nancy, was recruited to play triangle in Mahler’s rather long First Symphony. She swore she would never do it again!”

Two of her proudest memories are also her saddest. One was surprising herself by deciding, in 2011, to lead a performance of Rachmaninov’s Symphony No 2 just a day after her husband had died from brain cancer. “It suddenly seemed the right thing to do and the music was the most wonderful way for me and for the orchestra to remember Tony.”

Her performance of Vaughan Williams’ much-loved Lark Ascending at a subsequent New Year Concert provided another moving opportunity to pay tribute to Tony.

SASO, she says, has always been a friendly orchestra in a city where amateur music-making thrives. She is by no means retiring from her many other music interests. Aside from teaching, she will continue as Concert Master of the Amadeus Chamber Orchestra and to sing with the St Albans Chamber Choir. She takes increasing pleasure in performing chamber music.

In addition, she is looking forward to a performance of Wagner’s Tristan and Isolde in Saffron Walden that will be the latest in a series of the composer’s monumental music-dramas conducted by her partner (and guest SASO conductor and percussionist), Michael Thorne.

However, when the last bars of Nielsen’s ‘Inextinguishable’ Symphony echo around St Saviour’s Church on the evening of Saturday 6 July they will, for SASO at least, mark the end of an era.