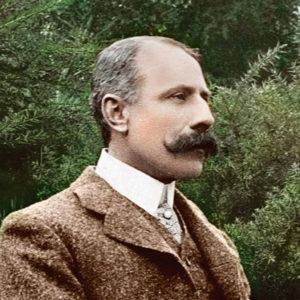 Two epoch-making works by English composers are brought together in the St Albans Symphony Orchestra’s spring concert on Saturday 11 May (7.30pm, St Saviour’s Church, Sandpit Lane, St Albans AL1 4DF).
Premiered within thirty months of each other, the Symphony No 1 by Edward Elgar (pictured, left) and the Fantasia on a Theme by Thomas Tallis by Ralph Vaughan Williams not only galvanised their composers’ reputations, but also enhanced the international standing of ‘English music’ as a whole.
Elgar was in his fifties when he completed the symphony and was already celebrated for the Enigma Variations and his oratorio The Dream of Gerontius. Yet the symphony – by turns noble, passionate and romantic – marked him out as a master of orchestral colour to rival his German contemporary, Richard Strauss. Welcomed in 1908  as “the greatest symphony of modern times” by its first conductor, it achieved a hundred performances by orchestras in Europe and America in its first year.
Although closer to the start of his composing career when he wrote the Tallis Fantasia, Vaughan Williams was 38 and already known for his Sea Symphony and travels ‘collecting’ English folk songs. He had previously borrowed the modal theme by Tudor composer Thomas Tallis for a hymn tune, but his re-working of the melody for double string orchestra and string quartet achieved new heights of technical and spiritual inspiration.
First performed in Gloucester Cathedral in 1910, the Fantasia’s popularity – like that of the Elgar symphony – been boosted in recent years by the expanding audience of classical music recordings and the radio. The Tallis Fantasia has routinely featured among the top ten works in Classic FM’s ‘Hall of Fame’.
SASO’s programme, under guest conductor William Carslake, also features the popular overture that Vaughan Williams composed in 1909 for performances of the ancient greek comedy The Wasps. Besides conducting, William is a ‘composer-traveller’, writing music with strong ecological themes  – most recently Mountain Hares that he studied in the Scottish highlands.
Click here for information about tickets.