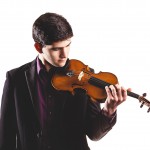 “Although Cristian Grajner De Sa is still an undergraduate he dazzled his audience ill St Albans on Saturday with his performance of Mendelssohn’s Violin Concerto.

“Performing with the St Albans Symphony Orchestra under guest conductor Leon Gee, his playing was dynamic and exciting and brought great life to this outstanding piece of music. His performance of the cadenza together with an emotional slow movement helped to make a great performance. And the orchestra under Mr Gee reacted well to his stimulating playing while the conductor’s precise style and watchful eye ensured a good balance between soloist and orchestra.”