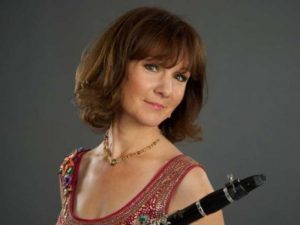 Since giving the first London performance last year she has become a champion for the work, which is inspired by childhood memories of rural Norfolk. “I really love the piece. It is rare to come across so beautiful a new piece of music that really inspires you. So I was really pleased to be asked to perform it again in St Albans,” she said.

“It is difficult to play, but I love it because it explores some of the softer sounds that a clarinet can make that give it a very poignant character. The music is partly about thinking back to childhood and maybe about the paths that you chose not to take. But it ends very optimistically – as though all those memories are important parts of your life that enable you to look forward.”

James Francis Brown is no stranger to St Albans, having won critical praise for compositions performed by St Albans Choral Society. He describes his concerto as “a bit like a kind of time travel”. “The final movement is called ‘The Far Grove’ and it is as though there is a place you really want to get to before the sun goes down, but eventually you come to accept that you can no longer get to it,” he said

The concerto is part of an all-English programme under SASO’s conductor Tom Hammond that also features A London Symphony by Ralph Vaughan-Williams. This portrays the capital just before the First World War in moods that range from uproarious celebration to tender melancholy. Music depicting the River Thames at the city’s indomitable heart may carry an added resonance for listeners after the recent terrorist attack on London Bridge

The concert will open with some of the English Dances written by Malcolm Arnold in the 1950s, characterised by a mixture of rumbustiousness and charm.