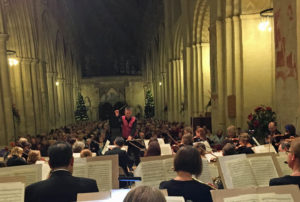 It wouldn’t be New Year’s Day in St Albans without the annual concert at St Albans Abbey provided by the city’s symphony orchestra.
For hundreds of people it is a much-loved annual event that brings an extra sparkle and evening of fun to the first day of the year. And this year’s event proved no exception to the rule with a first half packed with exciting and sometimes little-known works and a second concentrating on great music from the films.
Kicking off the evening was the younger Johann Strauss’s overture to his operetta The Gypsy Baron. Although the operetta is rarely performed, the music was a great start to the evening, bringing a first touch of Vienna to the proceedings.
It was followed by excerpts from Prokofiev’s Romeo and Juliet. Best known tor the Montagues and Capulets theme — better known as the ‘Dance of the Knights’ — the work also has more wonderful music, and conductor Tom Hammond chose the charming ‘Juliet as a Young Girl’ and ‘Romeo and Juliet before Parting’ for the performance.
Next came ballet music from French composer Jules Massenet’s Le Cid. On the face of it the six delightful miniatures might not appear to be well known, but I am sure many of those In the audience recognised them once the orchestra started to play them. Much the same might be said of Mexican composer Arturo Marquez’s wonderful Conga del Fuego, which the orchestra played with all the fire implied in the title.
Part two of the evening was largely devoted to some of the greatest film music of the 20th century, starting with Malcolm Arnold’s The Bridge on the River Kwai suite and continuing with John Williams’ Raiders of the Lost Ark and Bernard Herrmann’s music for North by Northwest. Moving on there were two works by Ennio Morricone, starting with an excellent arrangement of the theme from The Good, the Bad and the Ugly with a small and amusing choir to perform the vocal sections. That was follow by the wonderful Gabriel’s Oboe, with the orchestra’s principal oboe Barry Solomon giving a very fine solo performance.

The official ending of the programme came with a performance of Johann Strauss junior’s much-loved Blue Danube, put no New Year’s Day concert would be complete without a performance of his father’s stirring Radetzky March, which followed as a very welcome encore.

Throughout the evening the orchestra performed outstandingly. In recent years it has shown a steady Improvement in quality of performance and this concert was one of the best to date.
While the whole orchestra impressed with its quality, one section which rarely gets much credit really impressed. That was the percussion section, together with timpani player Kevin Connaughton. This was a concert that relied greatly on them as they handled some rapid switches around the instruments and some extremely tricky rhythms. All in all this was a fun evening of good and well played music and one which will, hopefully, Introduce more people to the orchestra’s regular concerts.