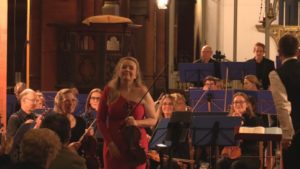 When both major works in St Albans Symphony Orchestra’s latest programme were first performed artists complained that they were virtually unplayable, writes John Manning. But at Saturdays concert at St Saviour’s Church, St Albans, the orchestra and soloist Clare Howick proved just how much performing techniques have improved since Brahms wrote his Violin Concerto, and Franz Schubert’s Ninth Symphony received its first performance.

Brahms’ Violin Concerto is a huge and powerful work which is demanding for both soloist and orchestra, but neither flagged in the performance. Indeed, Clare Howick’s performance was completely outstanding and the cadenza in the first movement was magnificent.

Probably the best-known part of the work is the Rondo finale with its dancing conclusion, something conductor Tom Hammond and the orchestra breathed great life into. Clare Howick received tremendous acclaim from the packed audience and was persuaded to give a rare encore in which she performed an Adagio by English composer Gordon Jacob.

Franz Schubert’s Ninth Symphony, The Great, was not performed in his lifetime and at its London premiere in 1856 it was considered so long that the first two movements were performed at one concert with the final two movements at a second. But today the length of the work is completely acceptable and the whole work is a great musical experience. The orchestra once more gave a sterling performance of the work, and once more demonstrated how its overall standard is steadily improving.

The opening work of the concert, Matthew Taylor’s Storr, a work inspired by a collection of rock formations in the Island of Skye, owes much to Tom Hammond who commissioned the piece for the Essex Symphony Orchestra in 2012. In parts, |I found this a quite heavy work which makes much use of brass and percussion, although there were lighter, almost elegant moments, and the cello introduction to the third and final section is very pleasing. I have a feeling that Storr is a little more challenging for those playing it than for those listening.