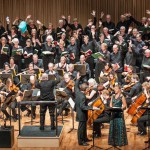 Critic Jim Pritchard, writing for  the ‘Seen and Heard International’ website, was bowled over by  the concert performance of Die Meistersinger von Nürnberg in Saffron Walden on September 14th – including SASO’s impressive playing.

“This was the first – and what a first – in a proposed series of operas in full concert performance in Saffron Walden at the splendid new Saffron Hall, a 730-seat ‘state of the art’ venue that is already attracting international artists and ensembles to rural Essex…”

“The original idea for the company came from Professor Michael Thorne, the vice-chancellor of Anglia Ruskin University, who is a passionate Wagnerian. For each of the past 12 years, he has conducted a Wagner opera, including two complete cycles of Wagner’s Der Ring des Nibelungen, in Portobello Town Hall in Edinburgh. There, rising young international singers hoping to make their names, are invited to sing the leading roles together with local soloists and chorus. Following Professor Thorn’s first visit to Saffron Hall, he was so impressed that he became determined to perform Wagner there it but felt that, as a first class professional venue, it demanded a cast of singers already established in Europe’s major opera houses. One of the singers involved in his Edinburgh performances was international soprano Elaine McKrill who acted as SOG’s casting advisor.

“And what an excellent job she did bringing together a talented mix of promising young voices and ‘old stagers’! They were supported – absolutely splendidly – by an enthusiastic chorus of forty-four invited singers under the direction of Saffron Walden Choral Society’s musical director, Janet Wheeler, and the St Albans Symphony Orchestra specially reinforced with additional professional string players though it was generally impossible to tell that it wasn’t a fully-professional orchestra as the sound they made exceeded my expectations. My wife suggested that the music sounded better than it often does for the Wagner at Longborough … and I have to agree with her.”

“At the end of the evening although Saffron Hall was shamefully far from full, there were enough present to give all concerned the standing ovation they thoroughly deserved. Michael Thorne proved himself totally ‘at one’ with the expansive spirit, spaciousness, geniality and dramatic architecture of the work and although he hurried things along he gave the music some much-needed time to bloom when necessary. He had obviously communicated his reverence of Wagner to his excellent orchestra and chorus.”

“Saffron Opera Group’s Die Meistersinger was something I felt lucky to have been present to hear and will never forget.”