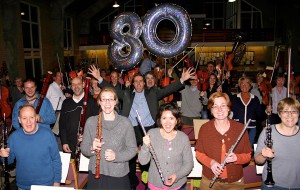 “The programme opened with Sibelius’ canonic work Finlandia, a perfect aural arena for each section of the orchestra in turn. (Bjorn) Bantock set the pace for the evening, which was one of great energy and absolute commitment to the music and ensured the audience was made aware of the dedication of conductor and musicians alike, with the impressive rounded sound of the brass section and the full string section sound – sonorities which have certainly been consolidated under Bantock’s baton over the last 18 months.”

“Local pianist Alissa Firsova joined the orchestra to perform one of the nation’s favourite piano concerti – Rachmaninov’s Piano Concerto No. 2…Her clear mastery of the piano, and understanding of composition and the orchestration of this concerto shone in her interpretation of the work as she fused both piano and orchestral textures into one organic sound throughout the work. The audience was enraptured…”

“Once more the vigour from the partnership between Bantock and orchestra was displayed in their  rendition of Beethoven’s epic Sixth Symphony in F, the Pastoral...The St Albans Symphony Orchestra once again gave an exceptionally energised, clean portrayal…exhibiting their ever-developing symphonic sound.”

“Since giving their first concert on April 19 1932, the St Alban Symphony Orchestra has contributed significantly to the abundance of music that is available within the city. We look forward not only to their next concert… but the promise of another superb 80 years of music making ahead of them.”