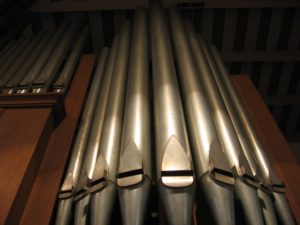 A feast of French music at St Albans Symphony Orchestra’s spring concert matches the majestic sound of an orchestra playing at full throttle with the mighty organ of St Albans Cathedral (7.30pm, Saturday 9 May)

But while the ‘Organ’ Symphony by Camille Saint-Saens will provide a thrilling main attraction for many, the concert also looks forward to warm, gallic nights and days with Claude Debussy’s Nocturnes and Joseph Canteloube’s delectable Songs of the Auvergne settings.

Although thoroughly French, the Saint-Saens symphony – his third and last – was commissioned by the Royal Philharmonic Society and first performed in London in 1886. The composer was at the height of his powers and lived for another 35 years, yet still declared: “What I have here accomplished, I will never achieve again.”

The organ only plays in two of the symphony’s four sections, but audiences have always been excited by its contribution, as well as some clever additional use of piano and piano duet. The work achieve pop-chart popularity following use as the main theme for the 1995 film Babe.

SASO takes particular pleasure in welcoming back, as organ soloist, its Vice-President Andrew Parnell who conducted the orchestra between 1983 and 2001. A former Assistant Master of Music at the Abbey and Master of Music at St Albans School, Andrew now lives and works in Ely.

The Chants d’Auvergne are folk songs in local dialect that Canteloube transformed with his enchanting orchestration. A musical heat-haze seems to hang over the celebrated Baïlèro which is one of six songs to be performed by Welsh soprano, Jessica Cale.

Jessica currently holds a scholarship at the Royal College of Music International Opera Studio, but has already performed many operatic roles and worked with leading ensembles that include the Orchestra of the Age of Enlightenment, the Monteverdi Choir, the Sixteen, and the Gabrieli Consort. In March 2020 she was due to take part in the final of the London Handel Festival Singing Competition.

Comparisons have long been made between hearing Debussy’s music and viewing the work of France’s great impressionist painters. But while ‘impressionistic’ is an apt description for his three dreamlike Nocturnes, their partial inspiration was works by the American artist Whistler. A depiction of slow-moving Clouds is followed by the whirling sounds of night-time Festivals and the mysterious music of Sirens heard across a moonlit sea.

The wordless song of the Sirènes will be performed by the Gloriana Women in Harmony choir, whose musical director is the St Albans-based singer and conductor Deborah Miles-Johnson. The choir, accompanied at the organ by Andrew Parnell, will also perform Litanies by Francois Poulenc which was written in 1936 using words recited by pilgrims at the shrine of the Black Virgin of Rocamadour in south-western France.

The Abbey concert is being organised in association with the Hertfordshire Festival of Music, whose co-director, Tom Hammond, is also SASO’s Principal Conductor. It provides a prelude to the main festival, which is now in its fifth year and runs from 12-20 June with concerts in Hertford and St Albans.